Posted by Julia Daniels | For Families, For Men, For Women
Reading Time: 7 minutes

Let’s play Jeopardy for one minute! Here goes: (you already have a massive clue about our topic…)

A.) If stealing the company equipment makes my life better, it’s okay. The company can afford the loss.

B.) I won’t steal the company equipment, because I could get caught and fired.

C.) Stealing the company equipment is actually wrong and would break my moral code, so I wouldn’t even consider doing this.

If you shouted, “What is integrity?” after statement “C” — congratulations! You are closest to the actual dictionary definitions of integrity.

Simply Put -- What Is Integrity?

“1) Firm adherence to a code of especially moral or artistic values : incorruptibility  2) an unimpaired condition : soundness”

When you start searching for examples of integrity, you discover nuances. What some consider integrity, we would call honesty, respect, reliability, or being a “man of his word”.

Integrity seems to be a compilation of qualities and values –– not limited to just one.

Interestingly enough, 3 out of the top 10 Google searches for “What is Integrity” were employment or career-related articles. So, what does every employer want in an ideal employee? Integrity, of course. It’s the key to building a successful business.

Authentic integrity is a two-way street. If you want to experience integrity, act with integrity. That’s the “reap what you sow” principle.

If we want to understand integrity, one place to start is by observing people we admire. Who are some heroes, past and present? Why do we admire them? Understanding this will enrich our lives — and help us set goals for ourselves.

Our heroes usually have some flaw that makes them imperfect. Their moral code, however, should be a standard they firmly seek to live up to. The truth is, we all fail to live up to our own ideals at times.

So while we admire, listen to, and follow the examples of  the examples of heroes, it’s important to chew up the meat and spit out the bones. In other words, find and appreciate the good.

Consider these lessons from a former slave who succeeded with a broom and integrity…
Tired, dusty, hungry, and dressed in ragged clothes, a young man of about 16 showed up at the Hampton Institute in Virginia, eager for an education. He had traveled 500 miles, partly by foot. He was a former slave. He had fifty cents in his pockets. And the year was 1872.

“Having been so long without proper food, a bath, and a change of clothing, I did not, of course, make a very favourable impression upon her, and I could see at once that there were doubts in her mind about the wisdom of admitting me as a student,” he later recounted.

The headmistress of the Hampton Institute briskly told the teenager, “Go sweep the adjoining room.”

When the headmistress examined his work, she said quietly, “I guess you will do to enter this institution.”

So, who was this stellar example?

Booker T. Washington recounts this day in his autobiography, Up From Slavery, “I was one of the happiest souls on Earth. The sweeping of that room was my college examination, and never did any youth pass an examination for entrance into Harvard or Yale that gave him more genuine satisfaction.”

Booker worked his way through school, paid all his debts, and later went on to start The Tuskegee Institute in 1881 for former slaves –– now Tuskegee University in Alabama. He worked hard and lived to see his life-long dreams and goals fulfilled.

“…from my early childhood I have had a desire to do something to make the world better.”

Booker’s life demonstrates the very heart of integrity –– making the world a better place for others. If you desire to be a world-changer, you’ll need integrity. So again, what is integrity? 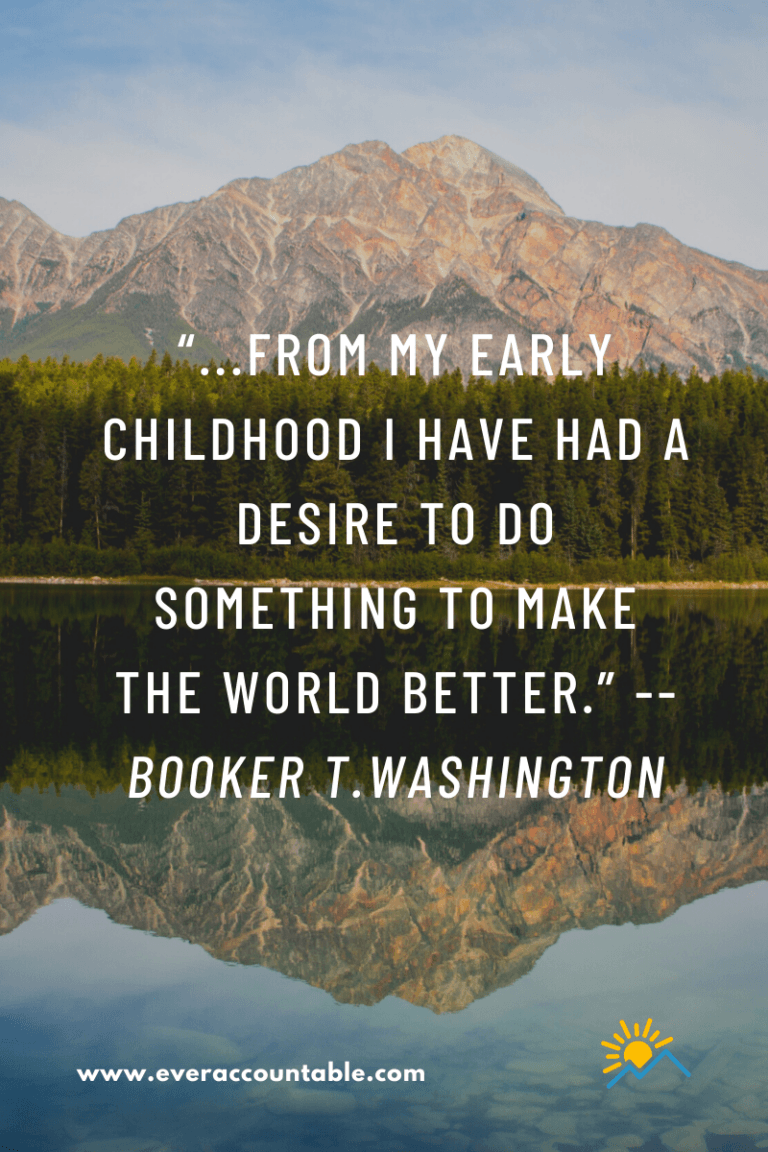 Next, is integrity easy?

Actually, integrity is quite costly at times.

What if keeping your word costs you more than you could imagine?

The excellent movie “Mr. Church” tells the fictitious modern day story of a man keeping his promise to his dead former boss, who left him money and instructions to cook and care for a young mother dying of cancer and her small daughter Charlie.

Mr. Church goes above and beyond keeping his word out of self-sacrificial love for Charlie and her mother. He prepares the finest meals, pouring love and attention into Charlie along the way.

Well, Charlie’s mom survived her cancer diagnosis by SIX years, not the six months Mr. Church signed up for. She dies shortly after Charlie’s highschool prom. Mr. Church becomes her guardian. As the icing on the cake, Mr. Church secretly funds Charlie’s education.

While the story has yet another surprising plot twist (and, no more spoilers…) Mr. Church never becomes a famous chef. Instead, he poured his life efforts into two seemingly unimportant people. But to those people he made a huge difference in their lives for good.

Large scale success, then, is not always a good measure of integrity.

This is a bright ray of encouragement for every life poured out unselfishly behind the scenes for the good of others. Every faithful, kind, and patient nurse, mother, father, teacher, administrator — the list of hidden heroes is actually endless.

People of integrity are all around us. They’re the folks who quietly make the world go round.

Some say integrity is who you are when no one else is looking.

This includes your inner thoughts, motives, and actions. It’s also how you treat others when no one else is around. When you’re honest and admit your faults or flaws, that’s authenticity and integrity, especially if no one saw you slip up. 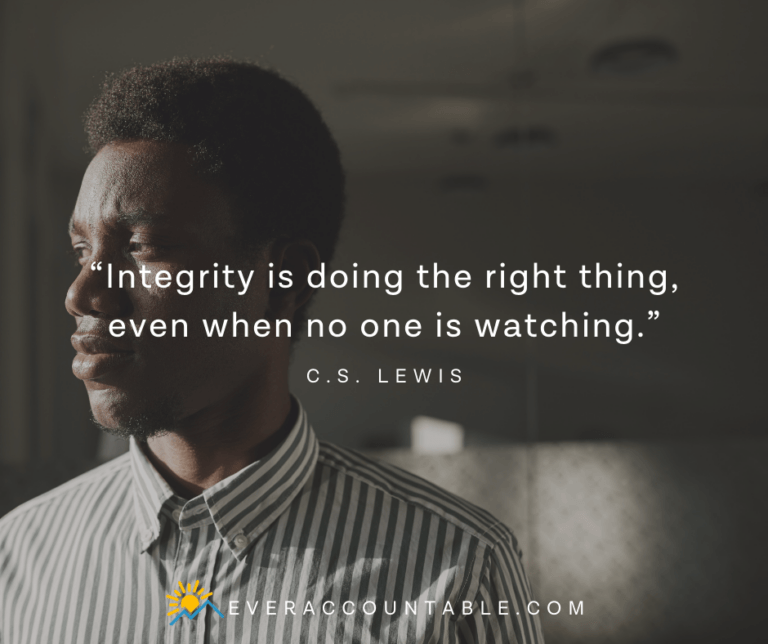 The Opposite of Integrity –– The Cheater

Unlike Mr. Church, things or position matter more to The Cheater than keeping promises. When we ask, “what is integrity”, we need to consider the Cheater. This is someone (even our own alter-ego) who looks for the easy path by selfishly grasping for whatever they want.

We cannot trust a Cheater.

While it’s true that we have to “take the bull by the horns” to reach goals, how we do so matters.The Cheater, though, will lie, fake, or even steal to get a desired result.

In everyday life we all seek to avoid The Cheater:

If you keep your eyes on Cheaters and the wrongs you have experienced, you may become like The Cheater.

The law of sowing and reaping applies, even in our thoughts.

So let’s plant and nurture integrity and goodness.

Who inspires you? Who makes you desire integrity and why does this matter?

Why Integrity Matters To You

Cynicism summed up is a lack of hope in one’s outlook on life. You don’t think that change is possible, so you accept the status quo. Or you give up trying to reach your fullest potential.

However, when integrity grows, both accountability and hope flourish. Millennials and Gen Z, according to the 2020 Deloitte survey, are still hopeful and motivated:

“They’re the people most likely to call out racism and sexism, and to shun companies and employers whose actions conflict with their personal values.”

If you want to see the world become a better place for others –– just like Booker T. Washington’s dream –– then change that status quo! Be the change!

Personal integrity should matter to you, also, because you cannot lead the way to change if your personal life is a train-wreck.

To review, what does it mean for a person to have integrity?

We’re not claiming this is a complete list or that any one article can fully cover what integrity means. Surely, though, these are important guideposts to start thinking through integrity.

Leading a life of personal integrity opens doors. Instead of climbing to the top over the corpses of others, your journey will include beautiful relationships.

Equally rewarding, you will become free, wonderfully free, to offer a helping hand to others. Like Booker T. or Mr. Church, you can “do something to make the world better.” Integrity starts with you.