Posted by Ever Accountable Team | For Families, How to, Pornography Facts, Prevention
Reading Time: 10 minutes

But are there other links between video games and pornography?

To answer that question, this article will dive into:

Well, long before the inception of the personal computer, arcade games such as pinball machines arrived on the scene as early as the 1930s. By the early 1960s, it was common to find pinball gaming machines peppered with scantily dressed women in provocative and compromising poses.

Video Game History and the Tie that Binds

From Pong to Pac-Man, the first video games were innocuous and completely family-friendly. But it wasn’t long before designers were not only pushing the limits of decency within a game but were designing video games with pornographic intent and themes.

From the advent of the personal computer of the early 80s and the in-home personal gaming machines that quickly followed, as technology advanced it ushered in new ways for pornography to enter the home. Pornography in the home went from print material that could be quickly hidden in the back of a closet to being introduced into games that sat in prominent rooms of the house as early as 1981 when Apple II released the first softporn adventure game selling over tens of thousands of copies within the first year.

As an early adopter of gaming consoles, playing Frogger and the like, this new PC gaming world was different to be sure.

Walking down memory lane takes me to the late 80s where I played my first PC game. I had full control of Indiana Jones and could direct him through his quest by interacting with the text adventure. Y for Yes, N for No — right and left — my fingers on the keyboard for too many hours to count. Those basic commands and some highly grainy graphics; fully immersed and caught up in the fantasy and thrill, I was hooked.

Back then the graphics were more akin to playing Snake on your phone today. Pixelated and choppy, so not much room for highly detailed explicit material.

Fascinating fact break: In August 1991, there was one lone site someone could visit. Fast forward to 1994 when Yahoo hit the scene, ‘netizens’ were able to choose from over 2700 available internet pages available. Today, there are over 1.5 billion websites on the web.

Not only were PCs becoming gaming machines connecting to the network of playable games on the internet, vintage video game consoles were quickly being replaced with more sophisticated consoles that also connected to the web.

Similarities and Differences Between Gaming and Pornography

But it’s easy to see a correlation between the potential addictive aspects of gaming and the progressive history of using sexual content to gain market shares; resulting in a crossover effect that video gaming and pornography present. 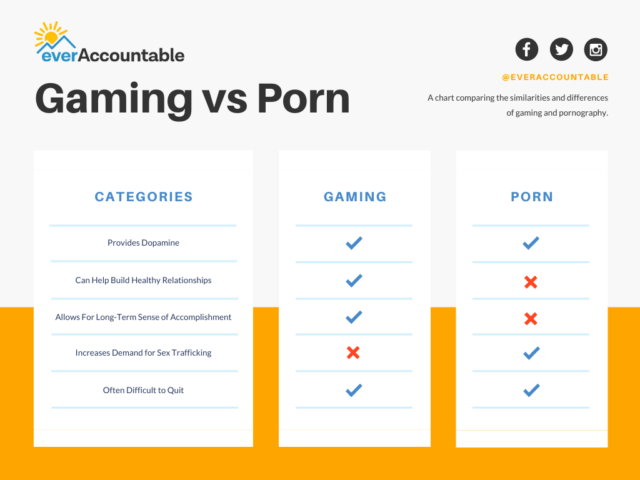 5 ways gaming and pornography are similar

What do you picture when you hear the term ‘gamer’?

Do you envision someone in a hoodie hunched over a gaming console in a dark room (or basement) for days and weeks living off cold pizza and diet soda?

That stereotype might be describing someone who is struggling with a gaming addiction but the picture painted above doesn’t describe the average gamer.

Most true gamers are proud to wear the title. Just as ‘nerd’ and ‘geek’ turned from a negative descriptor to a compliment, being called a gamer is not a derogatory slur in this day and age.

Some characteristics of a gamer:

What keeps a gamer engaged with video games? It’s that chemical neurotransmitter with a powerful punch: dopamine.

The overlap of pornography in gaming and the crossover between them

The internet is quick to make light of and meme just about anything which brings us to two rules, which are not actual enforceable rules but more of an internet maxim:

For instance, Roblox, the children’s gaming platform, has been struggling for years with oversite to counteract the uploading of pornographic games and system hacks meant to bypass those checks and balances. Roblox isn’t alone in the struggle as gaming providers such as Fortnite and Among Us are finding out.

It just gets easier for our youth to be exposed and it is becoming harder for teens and adults to navigate the gaming world without crossing into triggering adult content.

With so many options, it’s easy access to video gameplay.

Games at our fingertips

Not only are there many devices that can deliver pornographic content in covert and unsuspecting ways right from our fingertips, but some popular gaming genres are also more prone to overt and direct marketed adult video game content.

Suggestive, simulated, and interactive adult content has been found in:

From console to gaming genres, suggestive language and questionable content and explicit material are difficult to avoid. And once engaged, even harder to stop. 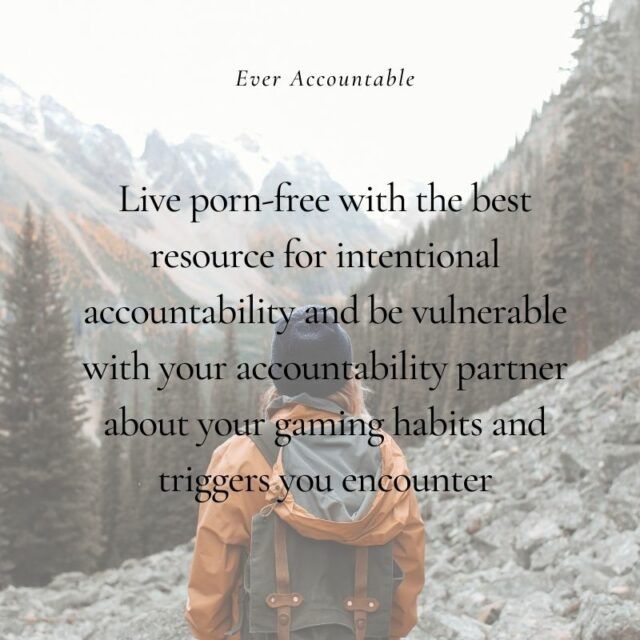 How to navigate the gaming world to avoid triggers and setbacks

Unless we isolate ourselves from everyone and everything, it would be difficult to avoid sexual content and triggers. But that doesn’t mean we can’t take steps to limit those encounters and have ready a toolbox of resources when needed.

Research games before playing or purchasing. You can find review sites such as Common Sense Media and Plugged In.

Check ratings on games and read the rating descriptors. Internetmatters.org provides great information and resources for understanding game age ratings such as those established by the Entertainment Software Ratings Board.

You can research their guide here: ESRB Ratings Guide

IOS gaming apps designed for an iPhone or iPad also have their own rating scale as does Google Play games. Google age ratings are determined by the International Age Rating Coalition (IARC). In addition, Google works hard to provide support for family-friendly content on Google products.

Another way to stay accountable while gaming is to make it a family or friend event — don’t game alone or in isolation. Be sure to reach out to your accountability buddy to tell them about the games you play or are thinking of playing or any triggers or content you encounter.

You can also try to activity substitute online gaming with other game options like board games and puzzles. Working on your health goals and participating in sports or hobbies can provide a healthy alternative.

From crossover content to shared platforms to common marketing tactics, there are many tangible links between gaming and pornography.

They also share a link with some components of addiction and recovery. Addiction doesn’t necessarily mean how much time or money is spent in pursuit of the desire. Instead, addiction is when the behavior or obsession or compulsion disrupts and affects your life and the lives of those around you.